Making Room for Rivers ­– allowing rivers to reclaim parts of their natural flood plains in strategic places – is a nature-based solution to climate change that will protect communities from devastating floods while restoring the environment and enhancing local recreation opportunities.

More than 100 towns and cities across New Zealand have families and communities living alongside rivers or on flood plains protected by flood mitigation schemes.

2022 was the wettest and warmest winter on record for Aotearoa, in which extreme rainfall events affected almost every region in the country, testing and breaking through flood mitigation infrastructure in many places. Flooding in August led to state of emergency declarations in Nelson, Tasman, the West Coast, and Marlborough.

As the effects of climate change continue to increase, more communities are going to face increased rainfall and larger floods.

"Many of our stopbanks and other flood mitigation infrastructure need expensive improvements to cope with this increased risk to communities. And ironically, the way these defences are currently constructed can actually increase the risk of flooding during large rainfall events."

Constraining rivers with stopbanks and concrete has given communities a false sense of security – that it’s safe to build homes and businesses right up to the edges of rivers. But constraining a river increases the depth of the water when it floods, so when a stopbank fails or is overtopped, the damage is much greater.

Constraining rivers also changes their natural form, reduces groundwater recharge, and destroys wetlands and other habitat for native fish and birds. Numerous rivers across Aotearoa have been straightened and constrained, with thousands of hectares of river and wetland habitat destroyed in the process.

Making room for rivers allows the land adjacent to rivers to flood safely, while providing for a whole range of other benefits such as riparian planting, wetland restoration and carbon sequestration, increased groundwater recharge, river habitat restoration for native fish and birds, and more recreation opportunities for people.

It also offers opportunities to restore lost connections between mana whenua with their local rivers.

What Forest & Bird is doing

Forest & Bird is advocating for the Government and councils to take a modern approach to flood mitigation that better protects communities and restores our rivers and wetlands. We’re working to help the Government, councils, and communities understand the concept. 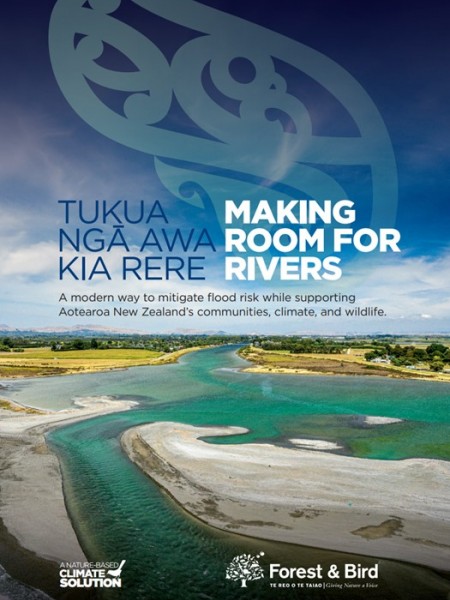 Starting with Tukua Ngā Awa Kia Rere | Making Room for Rivers, it’s time for us to start talking about how to implement nature-based climate solutions in Aotearoa. We want to work with officials and communities on options to make room for rivers in our regions, districts, towns, and cities. We also want to implement other solutions such as reforestation, increased pest control, and wetland restoration alongside our restored rivers.

We are calling on the Government to develop a national Room for Rivers plan to protect communities and wildlife in the face of increased flooding – and want a $500m contestable flood mitigation fund set up to help make it happen (see below).

When we protect nature, we’re also protecting our homes and our communities.

We’ll be encouraging political parties to adopt these actions in their election manifestos.

We’ll also be releasing a ‘long list’ of proposals and recommendations for Government and councils within the next few months that will help support this initiative in New Zealand’s most affected regions.

This is such a critical issue; we believe New Zealanders need to stay informed on this nature-based climate solution that will help keep many communities and wildlife safe.

Information from other organisations

Recent reports from the Department of Internal Affairs and Reserve Bank also highlighted the substantial risk of river flooding to communities in Aotearoa.