Fighting for nature can be an uphill battle during an economic recession. The government’s purse strings draw tighter and investment in our natural resources is too often seen as an unaffordable luxury.

Cutbacks at the Department of Conservation put added pressure on the environment and the duty fell to groups like Forest & Bird to step up.

Our membership and wider support base increased and we continued to advocate strongly by engaging with policy makers, community groups and playing a part on numerous forums.

We were quick to challenge through the courts, actions that threatened our unique landscapes and wildlife, especially on the West Coast’s Denniston Plateau and Mokihinui River. We took on the fishing industry and pushed for greater sustainability and better protection of our marine creatures and seabirds. We joined the collaborative negotiations to stop intensive farm development in the Mackenzie Country.

Our members remain the lifeblood of the Society and the value of their passion, dedication and commitment to conservation cannot be overestimated. It is their work that ensures Forest & Bird’s core objectives are realised in communities around the country.

More and more New Zealanders are choosing to support Forest & Bird. The battle for conservation may not be easy. But with 70,000 supporters and a strong, credible voice reaching all corners of New Zealand we remain steadfast in our commitment to protecting and preserving our natural treasures. 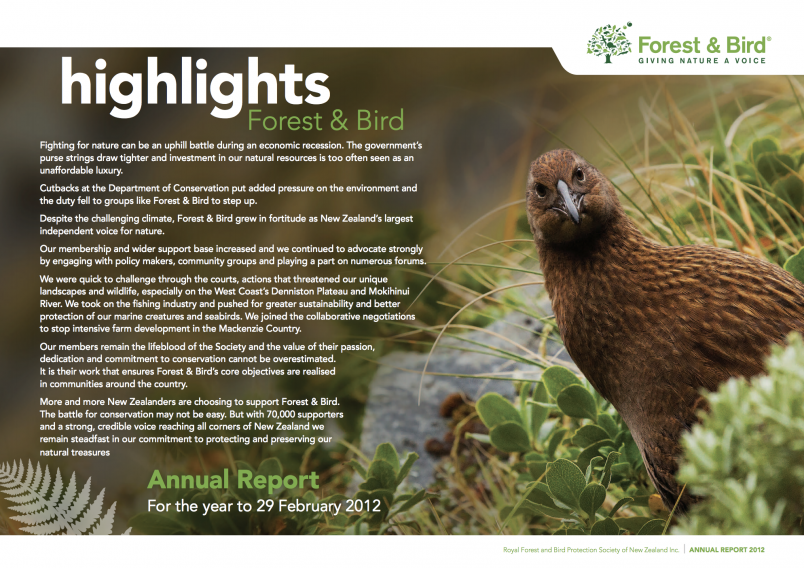