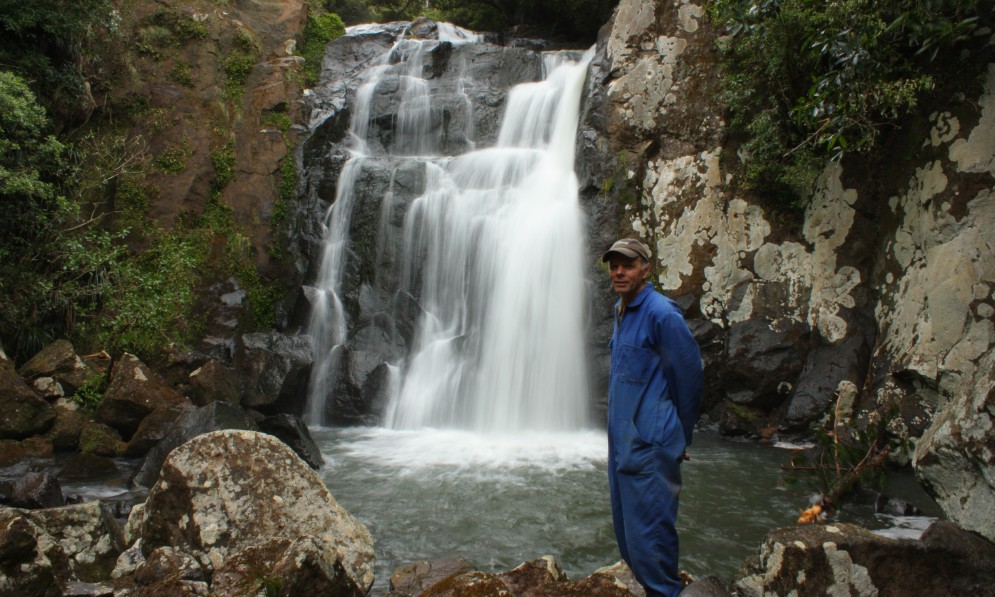 Ian Wilson by a waterfall on the Mangakaraka Stream in the Puketi Scenic Reserve. Image provided.

Ian Wilson, the recipient, was recognised for his services to conservation although he is quick to deflect any praise, adamant he is only one of thousands of Forest & Bird volunteers who have contributed to protecting and restoring our unique habitats and species over their lifetimes. 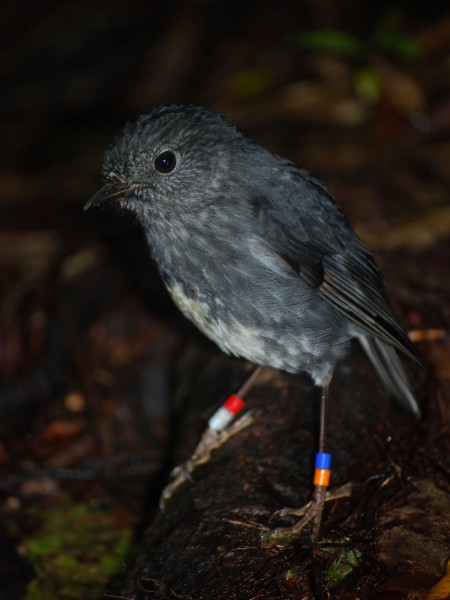 One of the original robins translocated to Puketi in 2009. This photo was taken in 2019 when he was at least 10 years old then (the average life of a robin is 3 years). He produced many offspring and was a very friendly bird, appearing whenever he heard people in the vicinity. Image provided.

Ian’s own contributions include being a committee member of Forest & Bird’s Far North branch for more than 30 years – a role he's only recently retired from.

He says: “During my time on the committee we pushed to have dogs banned from subdivisions in areas where kiwi were present, we opposed the clearing of large areas of native forest and the removal of excessive amounts of water from streams for irrigation; I had a regular column in the local paper, and I spent a lot of time promoting Forest & Bird initiatives such as the proposal for a Kauri National Park.”

He believes that the branch's advocacy made the council and community much more aware of the value of Northland's nature resources.

Alongside his contribution to the Far North Branch, Ian was a founding member, and volunteer operations manager of Puketi Forest Trust, which manages the Puketi Forest and Puketi Scenic Reserve. He’s placed part of his farm under QEII covenant and opened public access to Puketi Forest through his property. And Ian also supported the gifting of a significant stand of forest, known as the Herbert Bismarck Matthews Reserve, to Forest & Bird.

A veteran volunteer we asked Ian a few quick questions about conservation, the future and whether he has a message for all our awe-inspiring volunteers across the motu:

If you could go back in time, what one thing would you have done as a child to protect our special ecosystems – and would you recommend the same thing to young people today?
I have often wished Forest & Bird’s Kiwi Conservation Club (KCC) was running when I was young. I think all young people should belong.

What has been your most satisfying conservation experience?
I have had many satisfying experiences, but one that stands out occurred early one morning. As I was filling bait stations with pindone, I came across a healthy young raukawa plant. Raukawa was once reasonably common in Puketi but with the advent of possums in the early 1980s it was virtually wiped out and no one had seen a plant for many years.

It was a perfect morning, not a breath of wind and the sun had just come up. As I was admiring the raukawa a kōkako started singing about 20 metres to my left. And then it’s mate, twenty metres to my right, joined in. The duet continued for 10-15 minutes. It was an experience that made all the hard work seem so worthwhile. 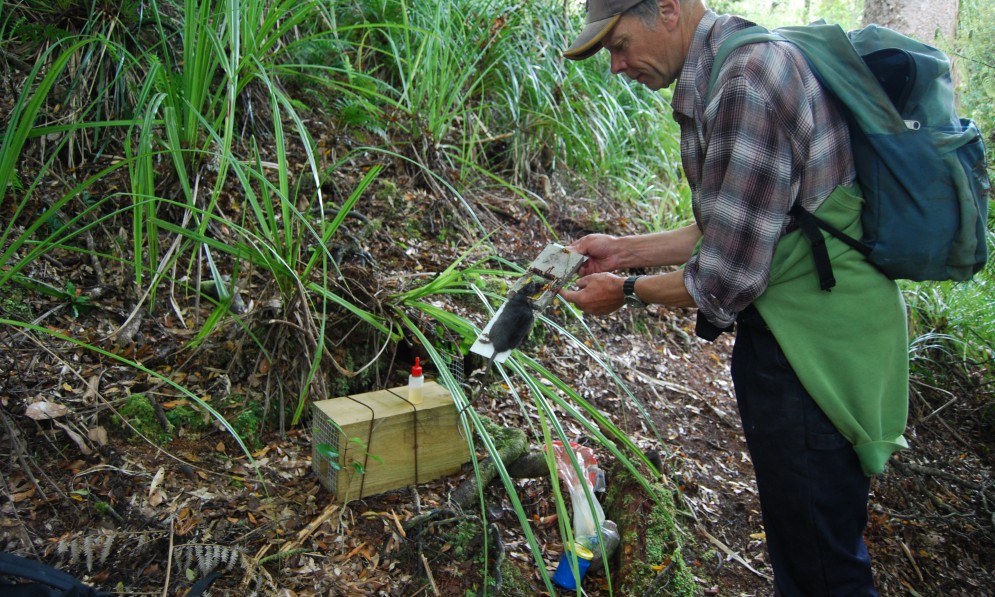 I make a point of telling people that each of the 1000+ stoat traps in Puketi Forest catches, on average, one stoat every 5-7 years. So, they must be prepared to replace the bait at least once a month for the foreseeable future if they want to catch the stoat that comes cruising by at widespread intervals.

Even when traps are regularly serviced the results can be discouraging. People think they are making good progress when pest numbers drop and then they go up again as the increase in available food, due to the removal of pests, draws them in from the surrounding area.

Fortunately, there are several new methods of pest control in the pipeline but, as Dr Jan Wright says, “there is no point building a high-tech hospital if your patient dies in the meantime. We need to maximise the effectiveness of current solutions to reduce the impact of predators so that when a new technology is found there is still something to save.”

With the impact of climate change looming, in your opinion, what is the one thing the Government can do for conservation in Aotearoa?
If the Government spent more money on pest control our forests would recover from decades of browsing and thus store more carbon. Most of the forests in the north are in a bad way and are continuing to deteriorate. It’s the same situation throughout most of the country.

Where is your and your wife June’s favourite spot in nature? 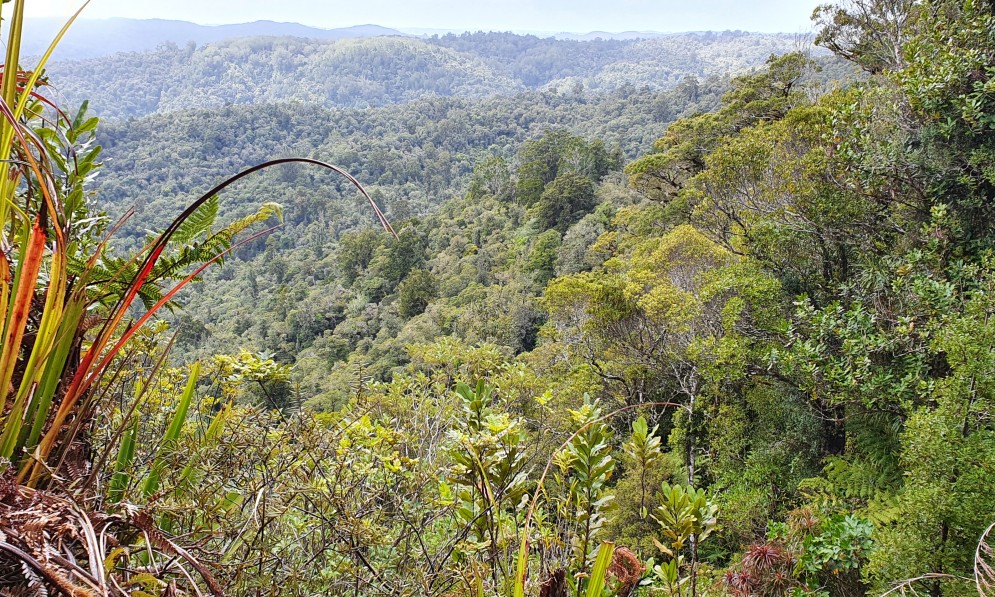 Our favourite spot is the eastern end of the Pukatea Track. It passes through a magnificent stand of mature kauri and contains most of the species that are associated with kauri. Many of them uncommon and very beautiful. These range from many species of podocarp, small trees and shrubs down to many small ferns, tiny native iris and brilliant blue fungi.

By day there are always good numbers of tūī, riroriro grey warblers, miromiro pied tits, pīwakawaka fantails, and kererū pigeons. It is a kiwi monitoring site and at night several pairs of kiwi call regularly. During the warmer months there is always the chance of seeing pekapekalong-tailed bats flying along the track.

It is not just the diversity of vegetation and bird song that makes it special, but the whole atmosphere of that area is something quite unique.

Is there a message you would like to share with our fabulous Forest & Bird volunteers during Volunteer Week?

Anyone can help conservation by thinking about the environment and how they can make it better. Every bit, no matter how small it may seem, helps to preserve and enhance New Zealand's natural environment to ensure it is saved for future generations.

Remember, you are the unsung heroes of conservation. Never underestimate the enormous value of the work you are doing.

Be a voice for nature

The challenges facing nature need your voice now more than ever. We must be there to make sure the environment's voice is heard and to protect our wildlife and wild places. Joining Forest & Bird means you will be a voice for nature, receive our world class Forest & Bird conservation  magazine and be part of a community that stands up for the natural environment.

This article first appeared in the June 2022 E-news.