Bring back the seabirds

Life at the conservation coalface isn’t always simple, as Caroline Wood finds out when she visits a Forest & Bird seabird project on the Otago Peninsula.

This isn’t a walk in the park, I reflect, as I struggle to keep on my feet while scrambling up a steep slope from the beach towards Forest & Bird’s new sooty shearwater/tītī seabird project on the Sandymount cliffs. It’s early August and we’re at the start of a three-hour tramp to check predator traplines ahead of this year’s tītī breeding season. 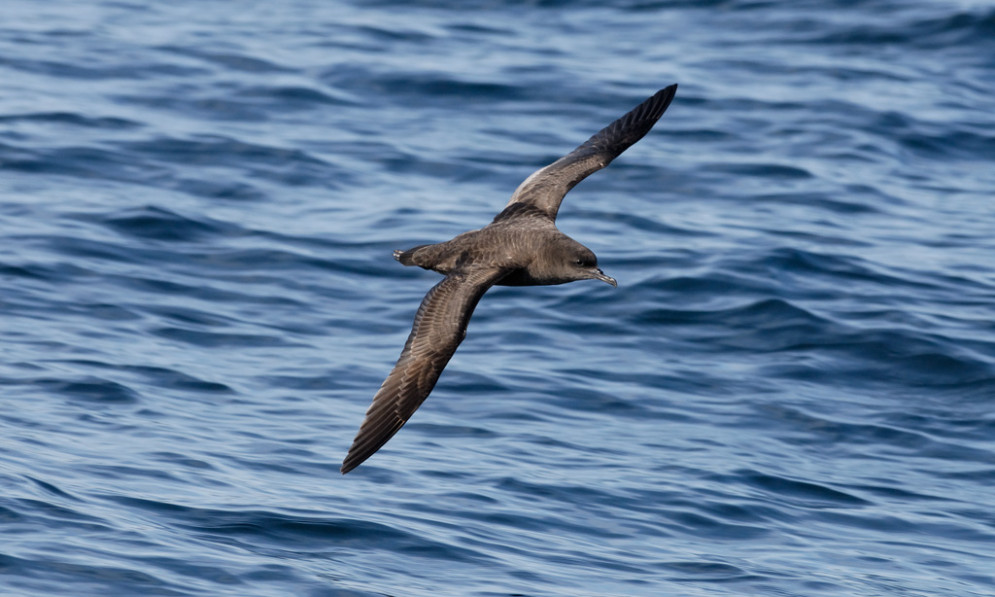 Sooty shearwaters tītī (Puffinus griseus) are one of the most abundant seabird species worldwide but populations are declining and in New Zealand, only a few remnant colonies persist on the mainland. One of them breeds at Sandymount Reserve. Photo: Craig McKenzie

The project is on Otago Peninsula, just outside Dunedin, the wildlife capital of New Zealand. In a few weeks’ time, hundreds of thousands of tītī will return from as far away as the North Pacific to breed on small southern off-shore islands, most of which are predator-free. A few hundred individuals will return to these vertigo-inducing Otago cliffs, just as their bird ancestors have for thousands of years before them.

Sandymount reserve is one of only a few remnant sooty shearwater breeding colonies left on mainland New Zealand. It’s also swarming with predators waiting to munch on the seabird’s eggs and young. We’ve seen evidence in the sand as we walked into Sandfly Bay – footprints of a large ferret, as well as many possum tracks. Possums are a massive problem at the tītī burrows and can happily survive on these treeless, sandy, windswept clifftops.

It gets steeper as we zig-zag up the hillside away from the beach. We are heading towards tītī territory through silver tussocks, harakeke/flax, native stinging nettles, and muehlenbeckia, mixed up with the dominant yellowflowering lupin. There’s no footpath, just a rough trapline cut through the scrub by a hardy Forest & Bird volunteer.

It’s great to be out of Forest & Bird’s head office, but this is hard yakka. Our Dunedin-based Bring Back the Seabirds project manager Francesca Cunninghame is used to this terrain. She effortlessly hops over fences and down steep hillsides to check nests and traps. Her young son Niko is with us in a backpack shouldered by his dad Jorge. Niko has been on similar expeditions since he was three weeks old. After working for Forest & Bird through the New Zealand seabird breeding season, the family will head to Ecuador to carry out conservation work on critically endangered mangrove finches – only 100 remain on Earth. 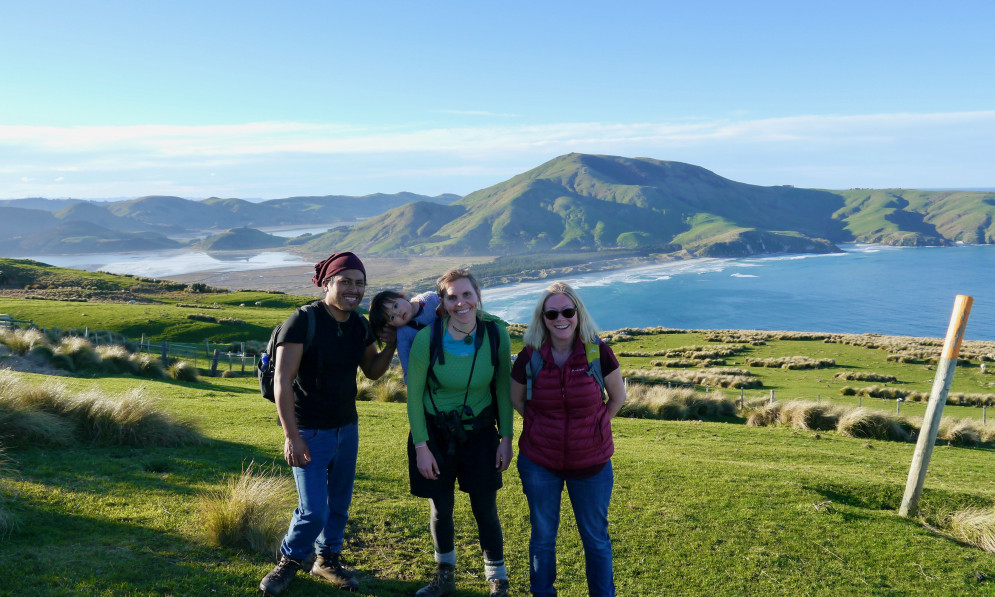 We emerge somewhere near the top. Someone built a fence... what, here? It runs at a crazy angle down the cliff face, towards the sea. I stop to catch my breath and imagine myself slipping on a tussock and tumbling down the hillside with a bemused seabird watching me roll past. But the views over the ancient volcanic landscapes of the Otago Peninsula are worth it, and here at last are the small tītī nesting burrows dug into side of the cliffs.

The Department of Conservation manages the Sandymount reserve, but there’s no road access to Forest & Bird’s tītī project and volunteers undertake most of the predator-control work. It’s hard work. The traps have to be checked, cleared, and reset every few weeks. Our volunteers need the skills of mountain goat, fitness of a marathon runner, and eyes of a kārearea, as the burrows are hidden in grass and we have to be careful not to collapse them.

We start winding our way around the clifftop, checking traps. The DOC 200s haven’t caught anything but the yellow plastic Timms traps put out by the Otago Peninsula Biodiversity Group and maintained by Forest & Bird have. Five possums in fewer than 10 traps, which is pleasing and depressing at the same time. Francesca and David Bowden, Forest & Bird’s programmes and volunteer manager, carefully reset the traps using freshly chopped apple. This definitely works in the possum traps, but the egg bait doesn’t seem to be working in the DOC 200s. Maybe try changing to fresh rabbit meat, muses David.

Francesca is worried about getting the predators under control before tītī return to breed this spring. At the start of the 2017 and 2018 breeding seasons, Forest & Bird surveyed the Sandymount site with a specially trained seabird-detection dog. There were numerous burrows and a lot of adult bird activity around them, but few had incubating birds, suggesting a breeding population exposed to high predation.

Remote camera monitoring confirmed the presence of rats, mice, possums, cats, hedgehogs, ferrets, and stoats. All of them can impact on nesting sooty shearwaters, their eggs, and chicks during the seven months the birds are actively breeding. The cameras will be used again this season to help monitor the breeding tītī.

“Sadly, last season were weren’t successful at protecting the tītī. All the active burrows we identified at the start of the season failed to fledge chicks, and the cameras recorded chicks being killed by introduced predators,” says Francesca.

“We’re now developing a plan to see whether we can alter our trapping to help the birds successfully breed.” Francesca says she tries not to feel disheartened about the multiple threats tītī face, as well as their land-based predators. Large numbers of sooty shearwaters are caught in New Zealand waters as bycatch, particularly by southern trawl fisheries, and they are also impacted by climate change and potentially over-fishing.

But there are rays of hope. Forest & Bird’s marine team is working to persuade the fishing industry and government to sign up to a Zero Bycatch pledge, put cameras on boats, and increase marine protection around Dunedin through the SEMPA process. And our national climate team is working to get the Zero Carbon Act passed to mitigate climate impacts in the ocean as well as on land.

Francesca has also just heard that another Forest & Bird seabird project at Lawyers Head will get extensive rat baiting and new seabird signage, thanks to Dunedin City Council. Forest & Bird will continue to do mustelid control at the site, home to threatened red-billed gulls and whitefronted terns. And Forest & Bird’s death-defying fairy prion fence at the nearby St Clair cliffs proved popular with tītī last breeding season, with six chicks fledging there.

This article first appeared in the Spring 2018 issue of the Forest & Bird magazine. Click here to learn more about our magazine.