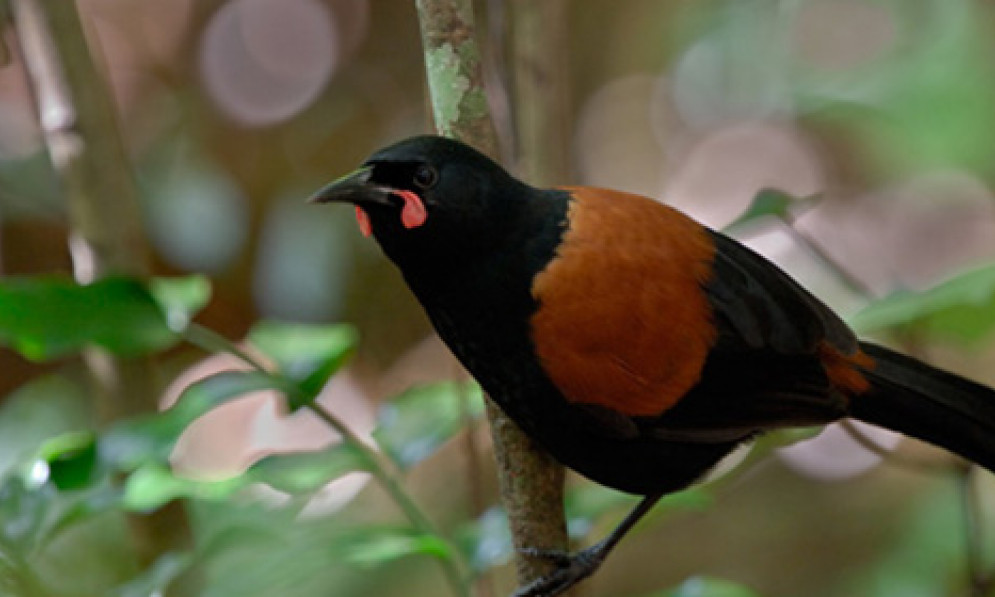 NEW LEADERSHIP
It’s announced that Nicola Toki will become Forest & Bird’s new kaiwhakahaere matua and our first female chief executive when Kevin Hague retires. She starts work in April, saying she is delighted to join a “society of good hearts” and is looking forward to building strong authentic relationships with members, iwi, and all our partners. In June, new Conservation Minister Poto Williams visits Forest & Bird’s Wellington office to officially welcome Nicola to the role and pay tribute to Kevin Hague’s contribution to conservation.

EVERY WETLAND COUNTS
Forest & Bird calls for a doubling of the number of natural wetlands by 2050 and publishes a special report on the significance of wetlands for New Zealand’s climate, community, and biodiversity. Supported by 10 other environmental NGOs, we set out five more actions that could reverse the decline in the country’s wetlands. We also launch a petition to support our Every Wetland Counts campaign, which is delivered to Parliament by the Hon Eugenie Sage in July.

NATURE-BASED SOLUTIONS
A major priority for Forest & Bird during 2022 is advocating to ensure the government includes nature-based policy solutions in New Zealand’s Emissions Reduction Plan and its Adaptation Plan. During the year, we raise awareness about how nature-based solutions can be a powerful antidote to climate change. We publish research showing how ramping up predator control, rewetting drained wetlands, restoring coastal dunes, and including agriculture in the Emissions Trading Scheme can help New Zealand meet its climate targets while boosting indigenous biodiversity.

SAVE OUR SHARKS
We call for an end to the needless slaughtering of blue sharks caught as bycatch in Aotearoa waters. In a hard-hitting media campaign, Forest & Bird’s marine team reveals some of the cruelty inflicted on these marine creatures after discovering some disturbing observer reports in an Official Information Act request. We want to see a ban on the practice of ripping out the hooks and throwing injured live animals back into the ocean. In August, we make a detailed submission to the government on its draft National Plan of Action on Sharks. Tooth-rific shark art is created by KCC members to support our call for stronger shark protection measures.

MARINE MATTERS
In March, Forest & Bird writes to the Minister of Oceans and Fisheries David Parker calling on him to close the Northland and Coromandel scallop fisheries after a NIWA report shows huge declines in scallop beds from Northland to the Coromandel and the top of the South Island. The following month, the Minister announces he is closing nearly all the scallop fisheries to give them time to recover. Meanwhile, our strategic advisor Geoff Keey is appointed to the government’s Hauraki Gulf Fisheries Plan Committee, which is advising on a sustainable fisheries plan for the Gulf. A generous donation allows Forest & Bird to employ Bianca Ranson as our new Hauraki Gulf coordinator.

HIGHS AND LOWS
Fifty tiny pōpokotea whitehead return to Forest & Bird’s Bushy Park Tarapuruhi Sanctuary, near Whanganui, following a huge community effort. Translocating this long-lost species to its ancestral home is a highlight for the staff and volunteers working hard to keep this nature sanctuary predator free. Meanwhile a single ferret wipes out almost every tītī sooty shearwater chick at one of our seabird projects at Irahuka Long Point, Otago. Trapping is stepped up, and the ferret is captured. The following month there is good news: 100 tītī fledge from our Bring Back the Seabirds project on the Otago Peninsula. In July, Forest & Bird’s Pest-free Hibiscus Coast project, north of Auckland, reaches a milestone of 100 traplines.

PUBLICITY & MEDIA
Forest & Bird keeps nature at the forefront of the public’s mind during the year with a series of campaigns particularly focused around the government’s response to climate change and marine issues. New chief executive Nicola Toki hits the ground running with a series of high-profile media interviews on a host of different issues. We keep our members, volunteers, and supporters in touch with our work through Forest & Bird magazine (100,000+ copies distributed during 2022) and Wild Things children’s magazine (40,000 copies printed in 2022). We also publish monthly newsletters for 150,000+ supporters and post on our popular social media channels, including Facebook and Twitter.

MARINE WIN
The roll-out of high-tech cameras on 300 fishing boats is announced, the culmination of a long-running Forest & Bird Zero Bycatch campaign to prevent the extinction of critically endangered seabirds and marine mammals. This campaign is supported by many generous donors. Cameras on boats are a game changer, as they will provide evidence of illegal activity as well as act as a deterrent.

CHILDREN’S CONSERVATION
This year’s Be with A Tree theme is “trees as climate warriors”, with lots of family-friendly activities showing the contribution of trees to a healthy world. Our Hakuturi Toa Kiwi Conservation Club (KCC) has been connecting children to nature for more than 30 years. With 48 dedicated volunteer coordinators, conservation trips, and our popular Wild Things magazine, 5000 members and their whānau are learning, creating, challenging, and advocating for nature in their backyards. Polly Pekapeka, KCC’s long-tailed bat mascot, continues her travels across the country raising awareness of her species. Thanks to everyone who supported KCC during 2022 with gifts of time and money, ka pai rā tēnei mahi!

TE RŌPŪ TIAKI MANU
Forest & Bird’s history project continues to uncover fascinating new stories about the Society’s early nature advocacy and impact. In June, we publish an in-depth report, based on newly discovered letters and archives, that shows the fledgling Society engaged with Māori on shared conservation goals. Founder Captain Val Sanderson launched a campaign in 1923 to educate his members about Māori conservation methods, as he believed they had much to teach Pākehā about nature protection. He also sought Māori members and published a pānuitanga poster in te reo in 1924. It called on all New Zealanders to protect their native birds or risk them going the way of the moa.

LANDMARK LEGAL CASE
In an important case, funded by our supporters, Forest & Bird lawyers try to stop a new coal mine from being built at Nightcaps in Southland. During a two-day hearing in Invercargill High Court in July, they argue that climate change impacts were lacking in Southland District Council’s decision-making process. Also in July, Forest & Bird wins a High Court case that halts Otago Regional Council’s attempt to have its entire Regional Policy Statement considered a freshwater planning instrument. This would have set a national precedent allowing other councils to shoehorn coastal and air protections into an “expedited” (ie, less democratic) freshwater planning process.

TALKING ABOUT CATS
A national debate about the impact of companion, stray, and feral cats on our wildlife ramps up this month after Forest & Bird uses the power of the media to call on the government to introduce a national Cat Management Act with mandated microchipping, registration, and desexing of pet cats to protect our wildlife. With a series of examples, we show how fragmented current policy settings are, with some councils regulating cats and others doing nothing. Our advocacy garners massive support from our nature-loving supporters, and later this month our team gives an oral submission to the Environment Committee on the issue.

STEWARDSHIP LAND REVIEW
Forest & Bird welcomes proposals to reclassify millions of hectares of stewardship land. A national panel of experts working with a mana whenua panel make recommendations on 504 land parcels on the West Coast, totalling 644,000ha. The potential opportunity to protect this precious land is significant, but the process is complex and falls short of expectations. After initially refusing Forest & Bird’s calls for an extension to the consultation period, the government does a U-turn, extending it until the end of August. Preparing our detailed submission takes weeks of intensive effort from staff and our West Coast Branch, and more than 6000 people make a submission via Forest & Bird’s website. At the oral hearings in September, we criticise the process and lack of information about the criteria used to allocate the land. We also share our concerns during a meeting with Conservation Minister Poto Williams on the West Coast.

NO NEW MINES
After Eugenie Sage’s Bill to end new mining permits on conservation land is drawn from the biscuit tin, Forest & Bird launches into action to support an end to new mines on conservation land in line with Labour’s 2017 promise. A copy is made of the 2010 banner that Nicola Toki helped march down Auckland’s Queen Street alongside Jacinda Ardern. We take it on a tiki tour of places that are still at risk of mining, including the Denniston Plateau, on the West Coast, and Coromandel Forest Park, where critically endangered Archey’s frogs are at risk from gold mining.

UNDERBIRDS ARE GO!
Bird of the Year 2022 returns to its avian roots, with an all-bird line-up of 71 candidates and no pekapeka in sight. One notable absentee is the two-time winner kākāpō, who is “taking a hiatus to focus on family”. The kākāpō ban causes controversy but also frees up the limelight for other overlooked and underappreciated birds – the underbirds! The underbird theme sees 21 species in need of some love highlighted on the Bird of the Year website. The winner was the pīwauwau rock wren.

MAKING ROOM FOR RIVERS
Our freshwater team shines a spotlight on the benefits of a making room for rivers – a nature-based climage solution that has the potential to reduce flooding risk while boosting local biodiversity. We publish an eight-page report called Tukua ngā Awa kia Rere | Making Room for Rivers.

NGARURORO WCO
In a win for nature, the Environment Court recommends a Water Conservation Order for the entire Ngaruroro River, Hawke’s Bay. In 2019, a Special Tribunal recommended only the upper section be covered. Forest & Bird appealed this decision seeking the lower river’s braided reaches also be recognised as outstanding.

YOUR GIFT TO NATURE
Our members, donors, and supporters love nature. You are passionate about protecting it and leaving a legacy of a healthy natural world to future generations. We couldn’t do any of our work without your support. Thank you! Forest & Bird is proudly independent of the government, corporations, and political parties. Most of our conservation work is funded by people like you, and this year generous New Zealanders gave Forest & Bird more than $8 million to help protect the wildlife you love.

LOVE THE GULF
Forest & Bird launches Arohatia Tīkapa Moana | Love the Gulf this month. Working with mana whenua and other conservation partners, we call for 30% marine protection, a plan of action to reduce sedimentation entering the marine environment, and an end to bottom trawling. We celebrate the big blue backyard on Auckland’s doorstep with a fun family event at Piritahi Marae, on Waiheke Island.

CENTENNIAL AHOY!
We can’t wait to share our whakapapa and make new connections during a series of inclusive and fun centennial events next year. Our natural heritage and conservation history is an important part of who we are as New Zealanders. As well as deep-diving into Forest & Bird’s rich history and impact, there will be plenty of opportunities to look to the future of conservation and the work that still needs to be done.

Over the past century, tens of thousands of people like you have been working to protect and restore nature. Together, we’ve achieved many wins – large and small – for our wildlife and wild places. Thank you for your passionate support in whichever way you choose to give it.