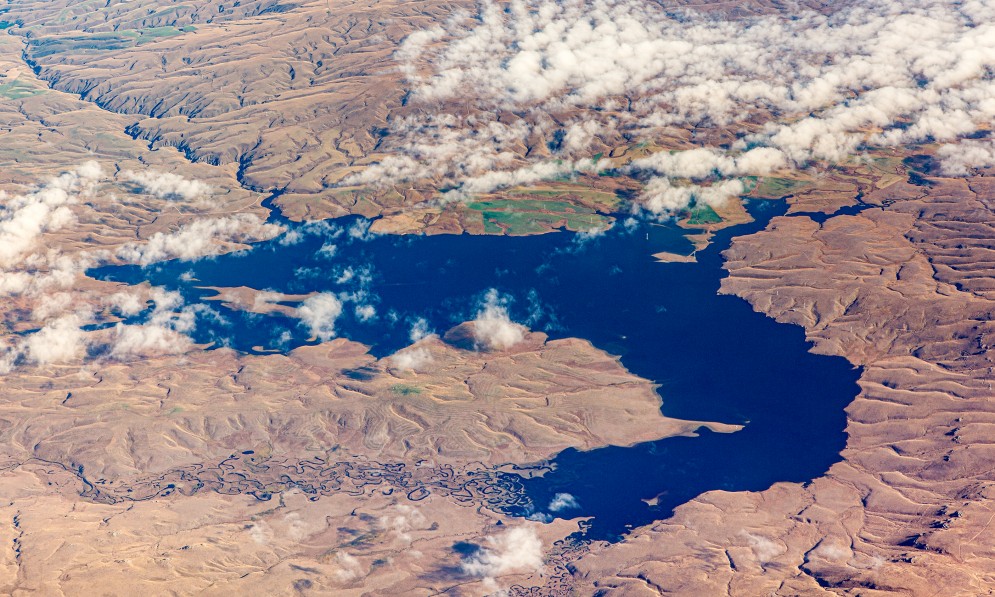 This is the epitome of “big hydro”: flooding an area of 120km2 and creating a 1.5km long lake.

If the project goes ahead, the nationally important Teviot River scroll plain wetlands would be destroyed and there would be other environmental impacts on the Clutha River, the likely water source for the new lake.

Dubbed the “NZ Battery Project”, the aim is to provide a back-up power supply during our many “dry years”, when existing hydro schemes don’t receive enough rainfall or snowmelt to meet electricity demands.

The government also hopes the $4bn project will help achieve its target of 100% renewable electricity generation by 2030 and support decarbonising the wider energy system by removing fossil fuels.

Forest & Bird supports efforts to reduce New Zealand’s reliance on fossil fuels and cut greenhouse gas emissions, but we have several concerns about the Lake Onslow project. These include:

Some e-NGOs, including the Environmental Defence Society, have suggested the environmental impacts may need to be accepted as a trade-off for the greater climate good (see ‘Destroying the environment to save it’, Stuff, June 2022).

However, energy experts are beginning to question some of the science behind this huge infrastructure project – the first time pumped hydro has been attempted in New Zealand.

Some scientists and environmental groups, including Forest & Bird, are suggesting there may be better ways to deal with the dry year problem while also decarbonising the economy.

We pointed out the $4bn scheme, with an estimated cost of $250 per tonne of CO2 avoided, would be an expensive way to reduce New Zealand’s climate emissions.

It would take many years to plan, build, and operationalise this infrastructure project. Therefore, it is highly unlikely Lake Onslow will help the government meet its 100% renewables target by 2030.

The NZ Battery Project will have a huge impact on New Zealand’s electricity market and pricing, and act as a deterrent to other forms of renewable generation.

Emeritus Professor Sir Alan Mark, a renowned botanist who has carried out research in the area, has raised the issue of the project’s financial viability.

Evaporation would lower the level of the lake, meaning it would need to be topped up more frequently with water from the Clutha River, reducing its profit-generating potential.

“I have measured evaporation at different elevations on the nearby Old Man Range and at the mid-elevations – as per Onslow – it is quite considerable,” said Sir Alan.

Forest & Bird believes there are more cost-effective and nature-friendly ways to decarbonise the economy, including geothermal, wind, solar, and biofuels.

We’d like the government to look at other options, such as retro-fitting systems to burn forestry waste in existing coal-fired power stations, as suggested by Ralph Sims, Emeritus Professor of Sustainable Energy and Climate Mitigation at Massey University.

In our briefing, we asked Ministers to prioritise the consideration of alternatives, including demand management and smaller scale storage solutions closer to cities and towns to help mitigate peak energy use on cold winter days.

Raising Lake Onslow would destroy nationally significant wetlands and the habitat of a number of protected threatened birds, plants, and fish species. 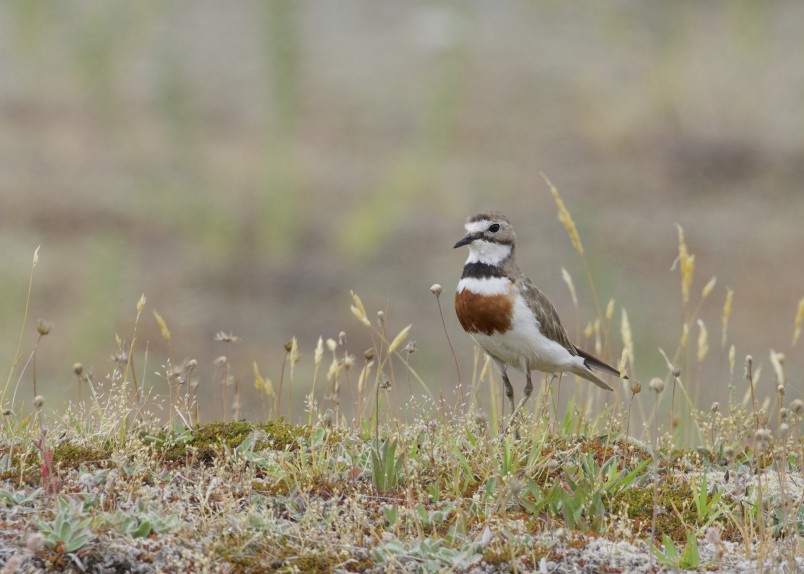 Lake Onslow was created by damming the Teviot River in 1890, drowning what was then called the Dismal Swamp.

Raising Lake Onslow would inundate these and completely destroy them forever.

The area provides habitat for 20% of the total population of nationally critical Teviot flathead galaxias. They live in two unnamed trout-free tributaries flowing into Lake Onslow.

This non-migratory species is found in a few areas in Otago and nowhere else in the world. It shares the same threat status as the kākāpō, making it one of New Zealand’s most endangered animals.

Raising the level of Lake Onslow would introduce trout predators and completely destroy the natural food web, which is most abundant around the fringes of the lake.

Five species of lizards have been recorded in the area, including four that are “At Risk – Declining”: the schist gecko, korero gecko, Otago green skink, and Southern grass skink.

Threatened plant species in the area include the nationally critical kettlehole cudweed (Pseudognalhalium ephemerum) and the nationally vulnerable Ranunculus ternatifolious, as well as possibly the largest population in Otago of pygmy clubrush (Isolepis basilaris) and a healthy large population of Montia angustifolia.

Several rare moth species have been found in the boggy wetlands of Teviot and Fortification Creek, including the ghost moth Sphagnum porina.

A 2010 report, prepared by the Department of Conservation, describes the Fortification Creek wetlands, along with nearby Teviot Swamp, Red Swamp, and MacKays Creek Headwaters as being “nationally significant” because of their size, intactness, range of hydrology, and diversity of plant communities. 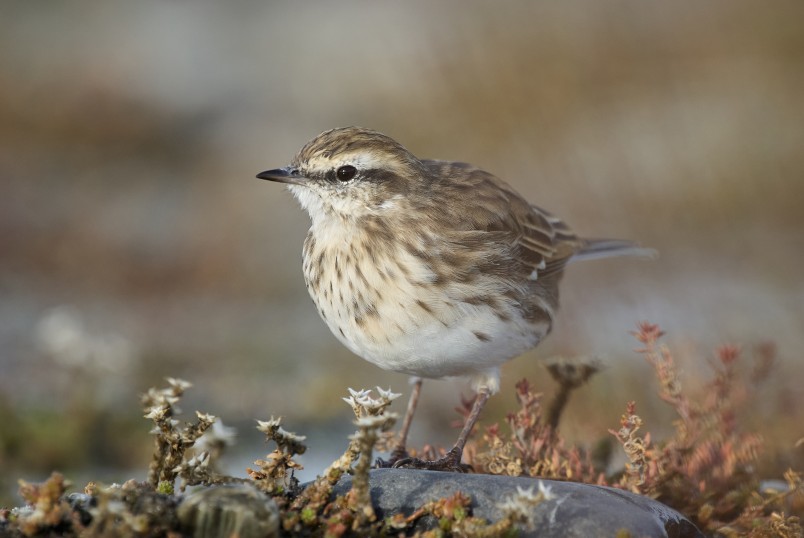 Pumped hydro, the kind of scheme being considered for Lake Onslow, has never been tried in Aotearoa.

Instead of one water source, there are two – an upper and lower reservoir – connected by a tunnel. Excess electricity at times of low demand is used to pump water from the lower to the upper reservoir, making water available to generate more electricity when demand increases.

Used carefully, pumped hydro can provide electricity back-up in dry years because rain isn’t as important. However, it uses more electricity than it generates.

The proposal is for the scheme to pump water from the Clutha River to fill Lake Onslow.

This could impact on flood flows in the river below the intake point, adversely effecting hydrology and ecology of what is New Zealand’s largest river by volume.

The impact on the people and species that rely on the Clutha River is not yet known but will be considered in the upcoming feasibility study.

The ongoing significant variation in lake level of 76m on a daily, seasonal, or annual basis (depending on how the pumped hydro is used) could have a significant effect on recreational use, including cycling, hunting, angling, swimming, and boating.

To date, the $4bn “cost” of the scheme doesn’t include a dollar value for the destruction of natural capital to make way for the new hydro lake – or the costs that might flow from downstream changes in the Clutha Valley.

In 2017, the extension of a similar pumped hydro scheme in Australia – on the Snowy River – was hailed as a “nation building project”. But the initial cost estimate of $2bn has blown out to $5bn, and the project is currently five years behind schedule.

Given the substantial time it would take to plan and construct Lake Onslow, there is a huge risk the technology will be outdated by the time it is operational, leaving New Zealand with a $4bn white elephant. 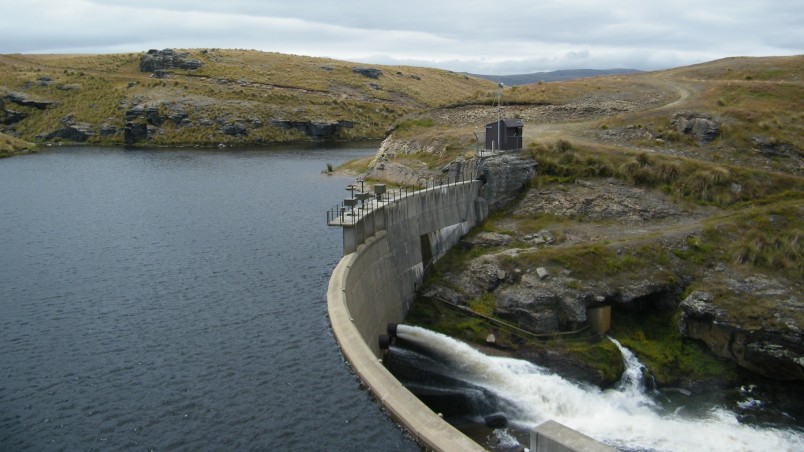 The Ministry of Business Innovation and Employment is leading a Phase 1 feasibility study into the NZ Battery Project, focusing on Lake Onslow as its preferred location.

In July, Cabinet confirmed a pumped hydro scheme at Lake Onslow appeared “technically feasible”, although more work is needed. Investigations will continue for the rest of the year and will incorporate environmental, cultural, social, and geotechnical findings, as well as a more accurate cost estimate.

The NZ Battery Project has also been carrying out initial investigations into alternative non-hydro options. Cabinet has confirmed the focus for the remainder of the year will be narrowed down to three – flexible geothermal, hydrogen, and biofuels.

The results of the Phase 1 feasibility project, due to go to Cabinet in December, will inform a decision on whether to proceed to the next stage. This next phase would involve detailed engineering design and preliminary works for a chosen solution to provide firmer knowledge of costs and capabilities.

The final phase would, if approved, be the construction of the selected option or options. 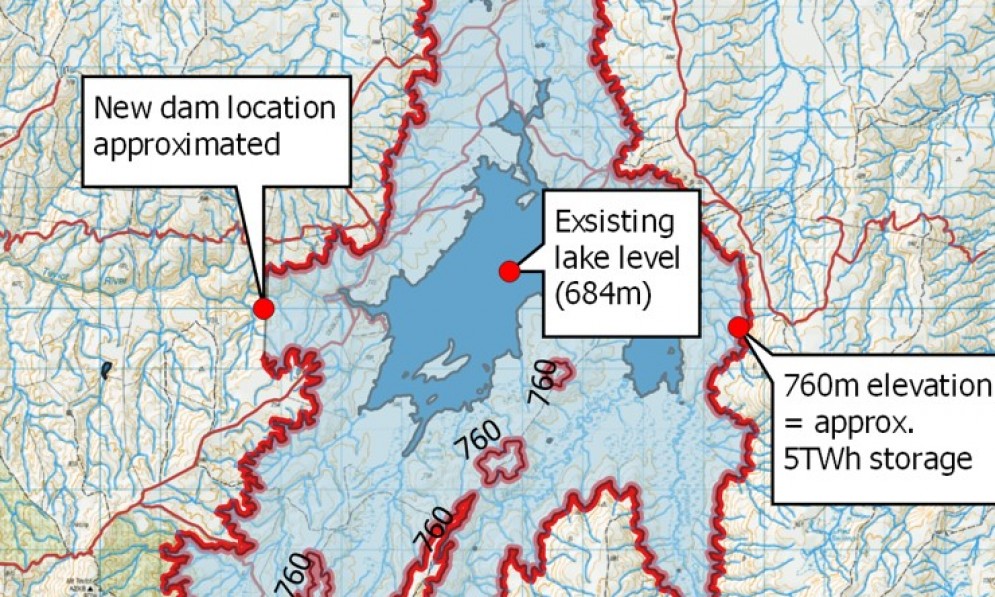 It would take up to seven years to construct and commission the $4bn pumped hydro scheme, according to MBIE. The current Lake Onslow (dark blue) could be raised by 76m to create the largest hydro lake in New Zealand (light blue outline). This reservoir would provide 5–7 TWh (terrawatt hours) of storage to provide back-up electricity in dry years. Image supplied/

Forest & Bird would like to see the government re-assess its 100% renewable by 2030 electricity target before green-lighting the Lake Onslow project.

It’s possible the country could do more to lower greenhouse gas emissions by introducing a slightly less ambitious target – say 98% – and meeting it by using demand-side management.

About 85% of New Zealand’s electricity generation is currently renewable. Most experts agree the country can get to at least 95% by the end of the decade – and that’s without the government getting involved!

University of Otago energy researcher Jen Purdie told RNZ in July that the government’s 100% renewable target was an expensive and inefficient way to cut climate emissions.

“The only reason to have 100% renewable is so that the government can go to meetings overseas and have this nice little catchphrase,” she said.

“What we really should be looking for is maximum decarbonisation, which to me is keeping two or three percent of gas in the electricity system for at least another 10 or 15 years while we get some of these other solutions in play.”

Energy only accounts for 22% of New Zealand’s total emissions profile. The agriculture sector accounts for 48% and the transport sector 20%.

Instead of spending $4bn on Lake Onslow, Forest & Bird believes the money could be better spent reducing agricultural and transport emissions.

This could cut the country’s overall emissions faster than embarking on a hugely risky and expensive “eggs in one basket” climate gamble.

Adapting to the climate crisis

Nature will help us cope with climate change, but first we need to help nature. That’s why nature-based solutions must be at the heart of Aotearoa New Zealand’s.

Placing nature at the heart of the Adaptation Plan will help us weather the changes in a way that also restores and protects the natural world that is so important to our cultures and identity. Read more about this Forest & Bird campaign.