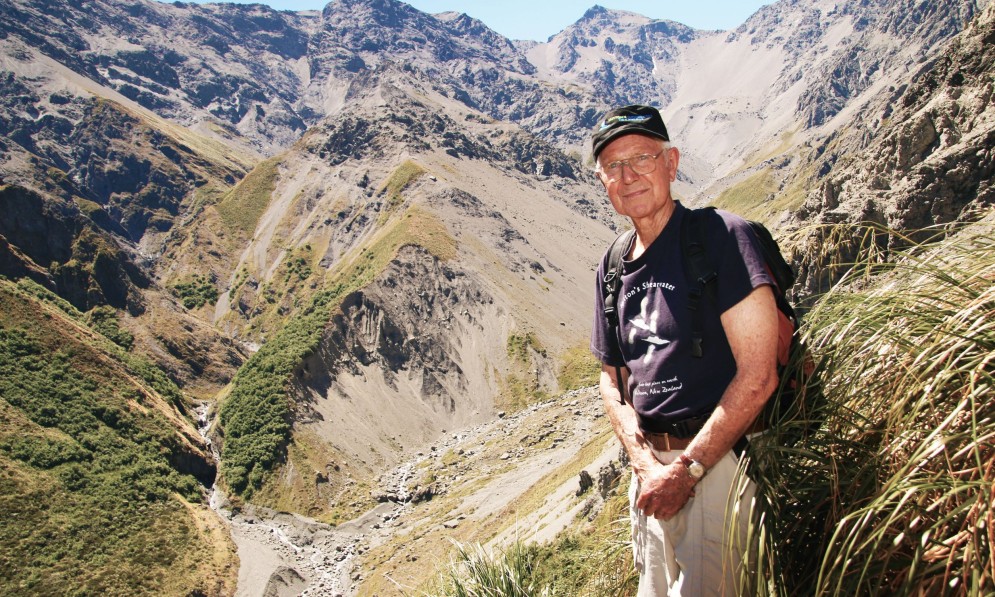 A whoop of joy in the morning silence of the Kaikōura mountains marked the start of Geoff Harrow’s more than 50-year labour of love to save a unique New Zealand seabird from possible extinction. The year was 1965 and the amateur Christchurch ornithologist had just found the decomposing remains of a Hutton’s shearwater, the first he had ever seen.

A version of this story was first published in the May 2015 issue of Forest & Bird magazine.

In the mid-sixties, people living in Kaikōura knew little about Hutton’s shearwater except that clumsy young birds would sometimes crash into their houses on misty autumn nights. Local iwi knew their ancestors had harvested tītī in the mountains but ornithologists had no idea where Hutton’s shearwater nested. Now, thanks to Geoff, Kaikōura celebrates the arrival and departure of the birds each year and the future of New Zealand’s only mountain nesting seabird is far more assured.

Geoff has loved birds and mountains all his life, so it seems he and Hutton’s shearwater were made for each other. In 2015, at 88, he still brimmed with energy but said he wants to “retire gracefully so I can wallow peacefully remembering 50 wonderful years with Hutton’s shearwaters”.

The first Geoff heard of the strange seabirds nesting in the mountains was from Ivan Hislop, who owned a motel near Kaikōura where Geoff and his family stayed in late 1964. Ivan said he and his brother had seen ‘muttonbirds’ nesting high in the mountains on a hunting trip more than a decade earlier.

In February 1965 Geoff went to see the place the Hislops had found the nests at the head of the Kōwhai Valley. There were a few false turns and waterfalls to negotiate and he didn’t quite reach the nesting site on the first day, hearing nothing but the bleating of wild goats and the occasional kea as he settled down for the night. 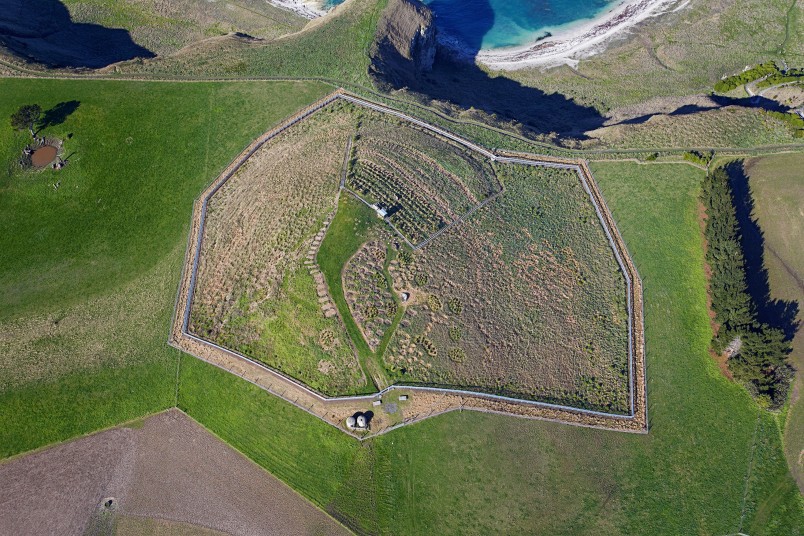 Success came next morning when Geoff found a smelly Hutton’s carcass as he came down a steep deer track. On the other side of the valley, the earth was pockmarked by burrows. He returned home with three dead birds and the Dominion Museum in Wellington soon confirmed all were Hutton’s shearwaters. “On later trips it became clear there were hundreds of thousands of burrows. I didn’t realise on my first trip but it turned out to be huge,” he says.

In the following years, Geoff went back to the Kaikōuras about eight times a year at weekends or during holidays from his work in pharmaceutical sales. Altogether he discovered eight nesting sites, although within 20 years only two remained – Kōwhai Valley and another much smaller colony on private land at Shearwater Stream. Joining him at various times were family. 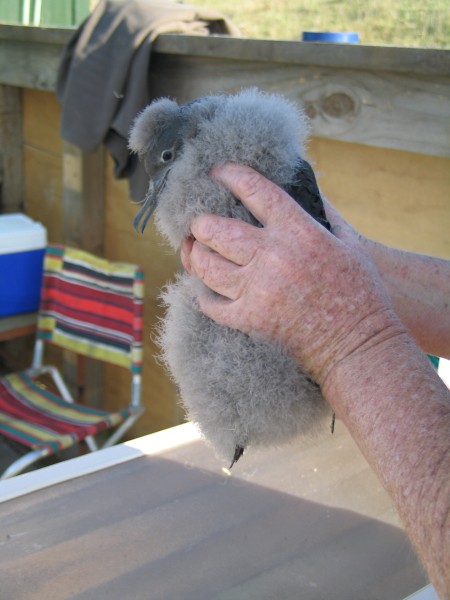 Stoats were believed to be the shearwaters’ main predator and Geoff saw them often in and around the birds’ burrows. But work by British PhD student Richard Cuthbert in the 1990s showed that pigs were the real problem. He suggested wild pigs in family groups of up to 10 or more were doing the most damage, rooting up burrows and consuming everything inside.

“Richard reckoned if they got into the big colonies they could wipe them out in two or three years. They could take out the smaller colonies in just a week or two.”

DOC works to keep pig numbers low in areas around the burrows and shearwater numbers at the two remaining sites are believed to be increasing, including over 100,000 breeding pairs and a total of over 400,000 birds. While an apparent slow recovery in recent years is encouraging, it follows a huge fall in previous years.

“When I started in 1965, I was certain there were getting on for a couple of million in areas I knew. It came down to about 500,000 in just 25 years. When Richard started looking at it and worked out it was very likely to be the pigs, that altered the whole thinking about protecting these birds,” Geoff says.

In 2005, DOC started moving chicks to a new site on the Kaikōura Peninsula as an insurance policy against a disaster in the mountain colonies. Cats and other predators were taking a heavy toll so Geoff proposed in 2008 to set up a charitable trust to raise money for a predator-proof fence. So successful were the trust’s efforts, it also became responsible for building the fence and entered into a joint venture with DOC, Te Rūnanga o Kaikōura and Whale Watch to manage the colony. 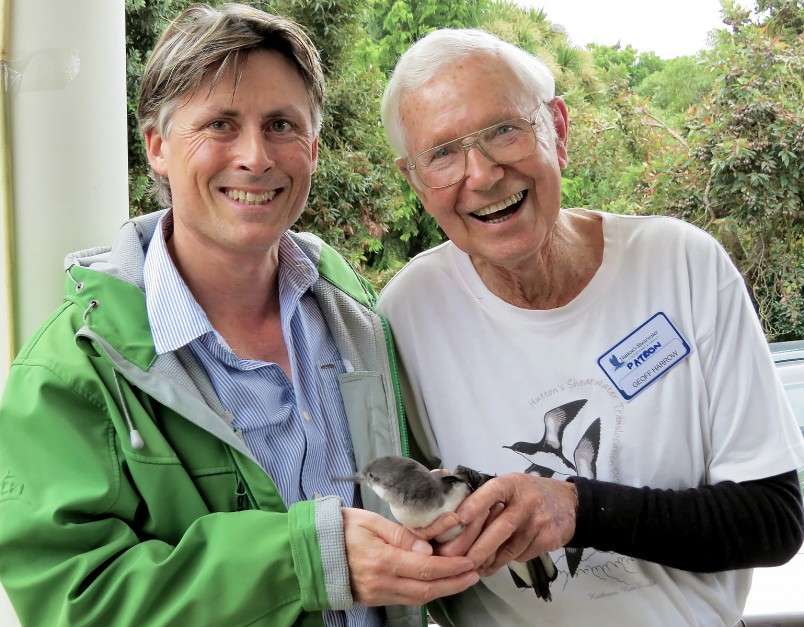 Looking back, Geoff expresses no surprise he worked for more than 50 years to save Hutton’s shearwater. “I’m a pretty obsessive sort of guy, it was something I was very enthusiastic about and wanted to do.“

Others share his passion to protect Hutton’s shearwaters. Forest & Bird’s Kaikōura chair and Hutton’s Shearwater Trust member Ailsa Howard admires Geoff’s “passion, humility and a very big heart”. Gina Solomon, a representative of local Ngāi Tahu organisation Te Rūnanga o Kaikōura on the trust, says she is happy he will continue as a kaumātua or trusted elder. “He has a mana of his own and he brings lots of energy and hope,” she says.

Jodie Denton, secretary of the trust since its formation in 2008, says Geoff has “old fashioned qualities, he’s gentle, very determined and has a huge amount of passion”. Geoff’s work was recognised with the award of Forest & Bird’s Old Blue in 2007. 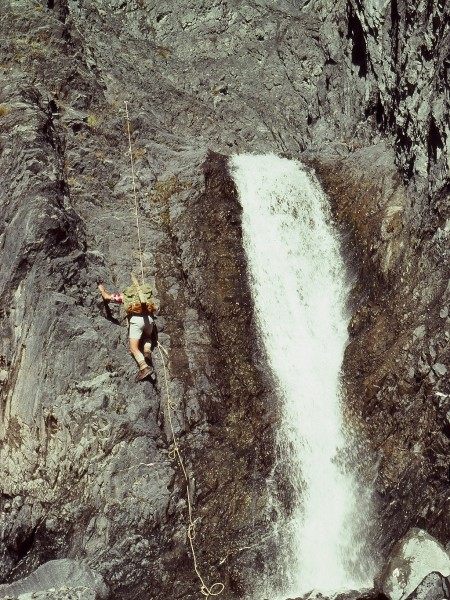 Geoff Harrow on one of his earlier trips to mountain nesting site. Image supplied

Geoff Harrow’s devotion to birds and mountains was shaped early. He joined Forest & Bird as a young boy in 1936 after visiting an older sister in Wellington and being entranced by the whiteheads, robins and other native birds at Butterfly Creek, near Eastbourne. He lapped up books about New Zealand’s early explorers and gazed longingly towards the Southern Alps west of his Christchurch home.

By his early teens he was biking to Arthur’s Pass to explore and he joined a mountaineering club while at high school. He quickly gained skills and experience climbing New Zealand’s highest peaks and in 1954 successfully applied to join the New Zealand expedition to the Himalayas led by Sir Edmund Hillary, just a year after the famous ascent of Everest.

The original goal of the expedition was to climb the then unconquered Makalu, a 8,463 metre peak. At 6,700 metres, Hillary collapsed from the effects of malaria and broken ribs suffered earlier while rescuing a colleague from a crevasse. “We had to abort the climb on Makalu and get him down to safety. There was no option, he would have died on us if we had not got him down very quickly,” Geoff recalls.

A few weeks later, Geoff and Colin Todd, the late uncle of Forest & Bird Conservation and Volunteers Group Manager Chris Todd, became the first to climb a neighbouring peak – the 7,129 metre (23,389 feet) Buruntse. Later the demands of work and family life saw mountaineering take a back seat. But Geoff’s taste for adventure remained and he later spent four months in Antarctica in 1966 helping to study emperor and Adelie penguins. 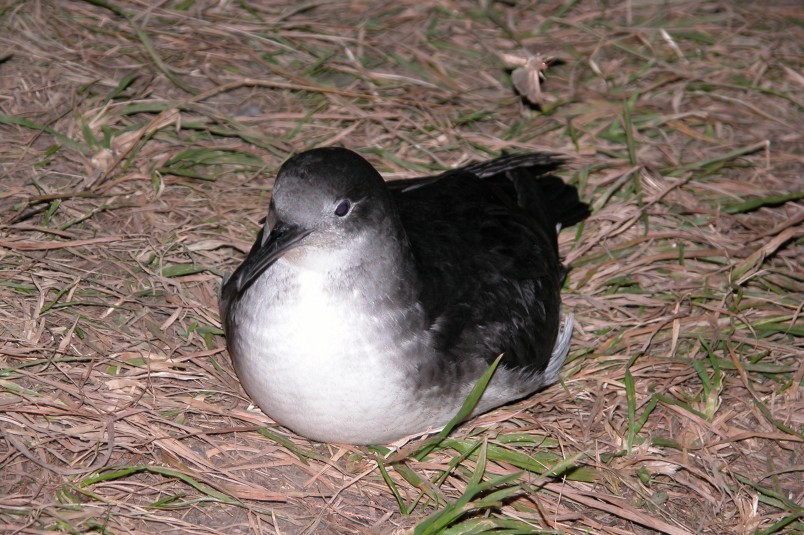 Hutton’s shearwater or tītī (Puffinus huttoni) was first described in 1912 and named after Frederick Hutton, an academic and curator of the Otago and Canterbury museums. The species is nationally endangered, with its two remaining breeding colonies located in the seaward Kaikōura mountains. Huge flocks can be seen off the Kaikōura coast during the summer months.

Māori used to harvest the birds in the Kaikōura mountains and preserve them in kelp bags for food or trading. Tītī migrate to Australian waters in the winter, returning to New Zealand in the spring. When the breeding birds return in spring, their nesting areas are often still covered by snow and they will wait for it to melt before cleaning out their burrows and laying eggs. 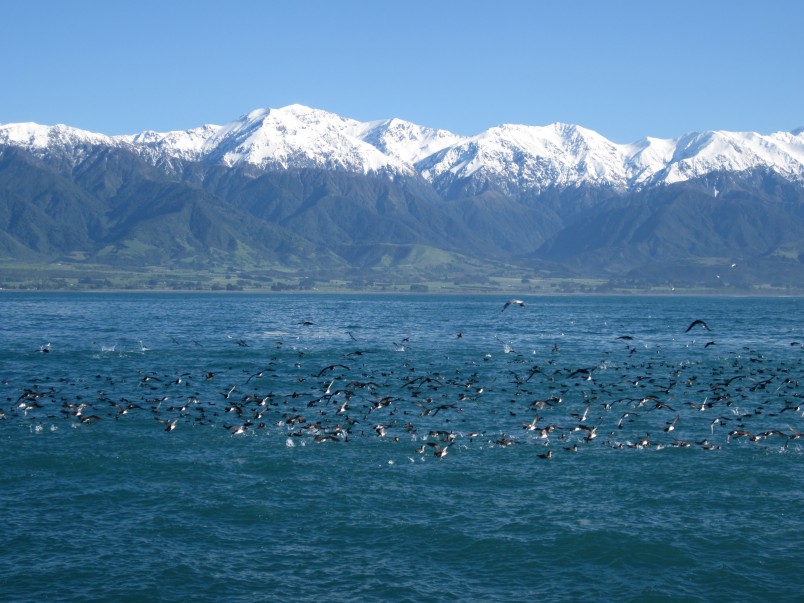 A flock of Hutton’s shearwaters at sea off Kaikōura. Image Whale Watch

Geoff Harrow set up the Hutton’s Shearwater Charitable Trust in 2008 to raise money for the building of a predator-proof fence around a new nesting site that had been established for Hutton’s shearwaters on the Kaikōura Peninsula.

The trust raised $300,000 in a year to build the fence, which was completed in early 2010. Young chicks are transferred from the mountain colonies with the hope they will recognise it as home and return there when they start to breed. Chicks are placed in wooden nesting boxes and fed on sardine smoothies until they are ready to fly away to Australian waters.

The trust also acts as advocates for Hutton’s shearwaters, especially in the local Kaikōura community, where they have been adopted as the town’s own special bird. The trust includes representatives of the local iwi organisation Te Rūnanga o Kaikōura, Forest & Bird, DOC, Whale Watch, which owns the colony land, and others with specialist knowledge.

In the 2015 breeding season, 31 adult birds returned to the new breeding site, 16 eggs were laid and seven chicks fledged, just four seasons after the first egg was laid. 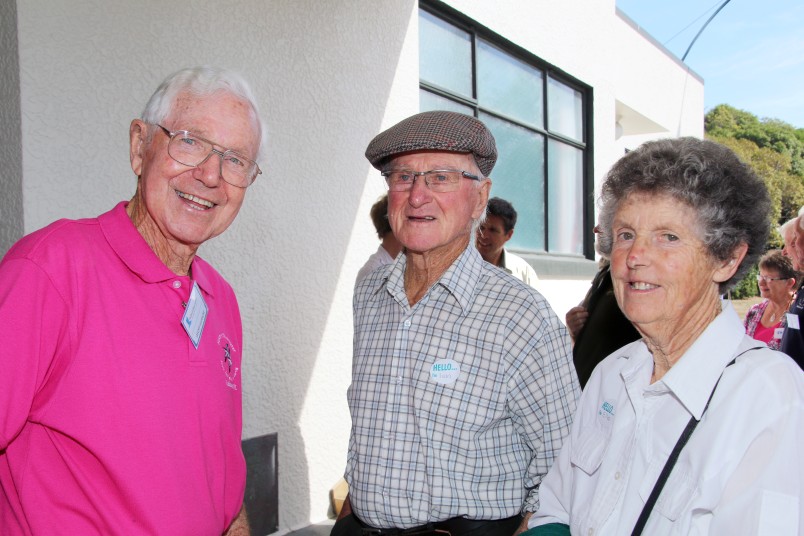 Geoff Harrow (above left) is recognised for his outstanding contribution to conservation in playing a critical role in the protection of the endemic Hutton’s shearwater.

The whereabouts of the breeding grounds of the Hutton’s shearwater, high in the Seaward Kaikoura Range, was completely unknown to science till the 1960s.

After hearing from hunters about burrows sighted in the area, Geoff set out on a difficult search of this remote and inaccessible location to find out if this was the breeding site of the shearwaters.

His confirmation that this was the location of the world’s only breeding colonies of Hutton’s shearwaters, and his subsequent work over four decades studying and protecting the birds, has been a valuable contribution to conservation.

Geoff joined Forest & Bird in 1936 at age 10 and even now, 70 years later, he remains actively involved in the Shearwater Recovery Programme, in particular efforts to establish a new Hutton’s shearwater colony on the Kaikoura Peninsula, and in educating community and school groups.