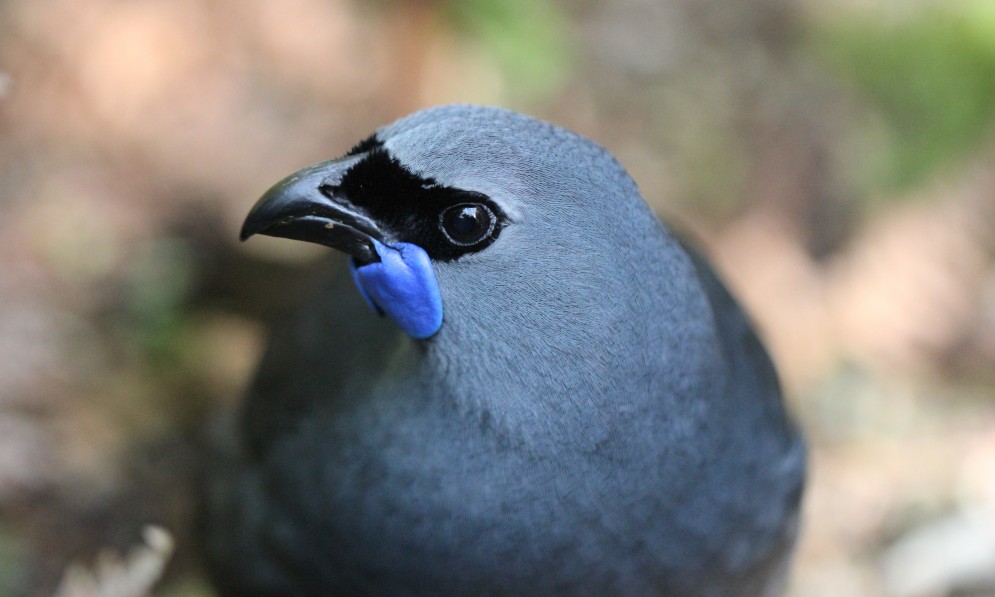 The biggest kept secret in Auckland’s Waitākere Ranges is the grey, blue-wattled bird soaring the forests in and around Ark in the Park.

The Ark, an unfenced sanctuary, is a partnership between Auckland Council, Forest & Bird, and Te Kawerau ā Maki, and Ark in the Park manager, Sam Lincoln, says she’s not surprised about people’s lack of awareness.

“So many people don’t even know there are kōkako here – but we are looking to change that, especially as more tracks open within the kauri dieback rāhui area [and after Covid].

“We want to share this taonga with more of the community and hopefully get more support for the Ark while we’re at it!”

Not all locals are ignorant of – or immune to – the charms of this delightful bird.  Around the edges of the sanctuary lies an area called the Buffer Zone.

The lucky group of residents living within this zone are privy to kōkako visitors on a regular basis. 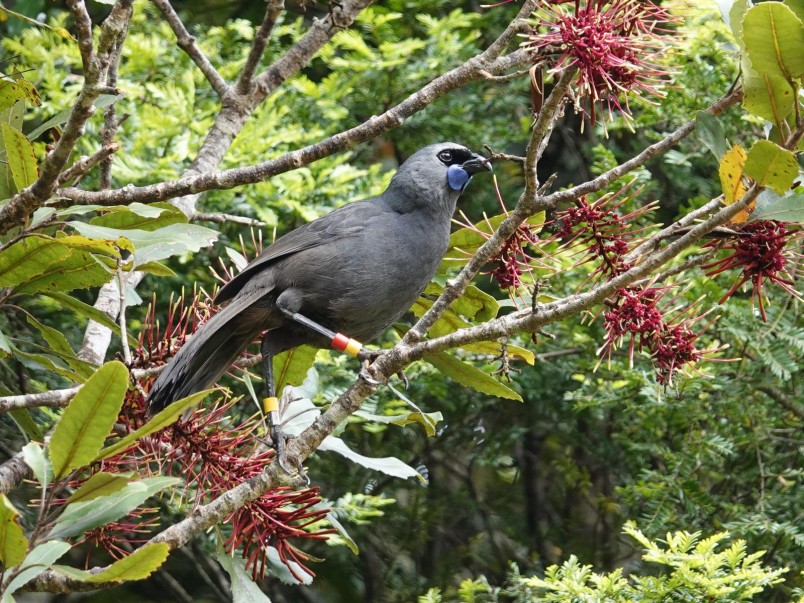 Kōkako in Ark in the Park in 2019. Credit Jacqui Geux

"I love the peacefulness of the bush and being out there with a flask [of coffee] and my lunch checking a trapline and two or three bait lines,” she says.

“But it’s time to start easing off. I’ll be cooking sausages for our Ark volunteers once a month when they’re out checking the traplines instead. It’s a joy to meet the new, younger volunteers coming through."

Kay Wight is one of these neighbours. Her home on Scenic Drive is ideally located opposite Ark in the Park and she has been involved in conservation work with the Ark for 20 years - thanks to the Ark founders.

"It was Karen Colgan who asked me to help in the buffer zone even before the translocation of kōkako. We would have nothing without the foresight and hard work of these volunteering pioneers, who are still around and very active in conservation. We are certainly standing on their shoulders."

More recently Kay's been sending regular updates to the Ark team on her kōkako sightings: "Good morning. Woken up by the singing of a kōkako this morning. My neighbour sighted a kōkako on Monday on the left-hand side of my driveway. No band info yet but will keep my eyes peeled! 741 is also hearing kōkako. Hoping for two 🤞🤞”

As a Buffer Zone volunteer, Kay has played a role in advocating for the kōkako project over the last eight to nine years.

“I welcomed new residents to the neighbourhood, encouraged them and the wider community to put bait and traps in their backyards [such an important job], and collected information about kokako sightings from them.

She also wrote and distributed a Buffer Zone newsletter, “which helps to create a sense of community within the neighbourhood”.

Kay says seeing and hearing kōkako in your own urban garden "is amazing!".

“Over the last five years, I've had one of my neighbours report they've had kokako regularly turn up at 9am sharp in their orchard for breakfast. Another neighbour had a kōkako pair nesting along her driveway, and a few residents in the Buffer Zone have photos of these gorgeous birds perched on their decks, peering in their windows!”

But it’s not all picnics and paparazzi. 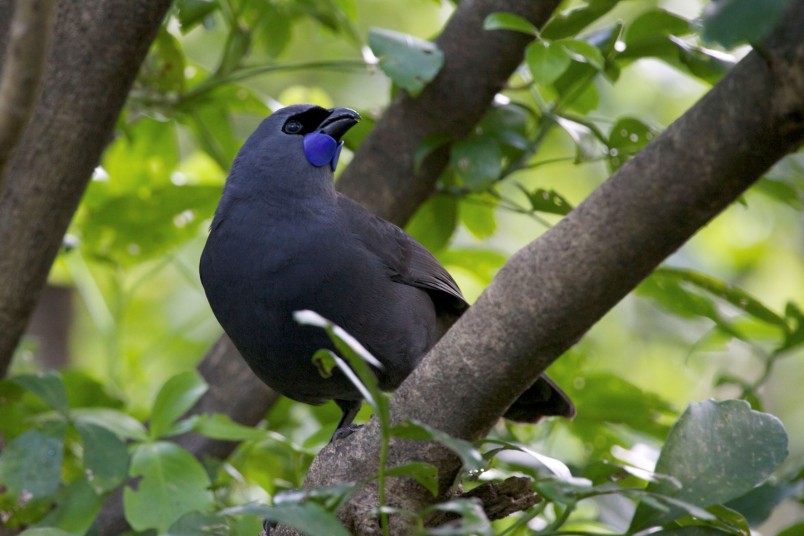 Kōkako in Ark in the Park in 2020. Credit Luc Hoogenstein

“Kōkako are struggling,” Kay says.  “It’s hard to keep pests down in the Waitākere Ranges as Ark in the Park is not a fenced sanctuary.”

Sam agrees that rat numbers are at scarily high numbers. “We've had the highest rat trapping numbers since we started recording it through the current system in 2016,” she says.

That’s why community awareness and engagement is so important.

Sam says the Ark’s mission is to support the local return of an independent and flourishing population of kōkako in and around the Ark.

“We want them here for anyone to visit – to listen to their dawn chorus from places like the Cutty Grass track.

“But they wouldn't be here at all without the huge amount of work put in by volunteers, and without the support of our buffer zone neighbours, who help by doing pest control in their own backyards to act as our 'fence', as well as making sure that kōkako that visit their backyards are safe from pets, especially cats, and pests.”

Recently the Ark has engaged a new Buffer Zone coordinator, Sarah Mansell, to liaise with and support the local community in their efforts to protect kōkako.

Kay is enjoying having a dedicated coordinator on board. “It’s so important to reach everyone in the Buffer Zone and build social licence for the kōkako project through community outreach.

“If we keep talking to people, drop them bait and encourage them to put down traps, ask them to consider not having cats, they will be your advocates.”

Then perhaps, one day, the magnificent kōkako will be seen across the Tāmaki Makaurau isthmus! 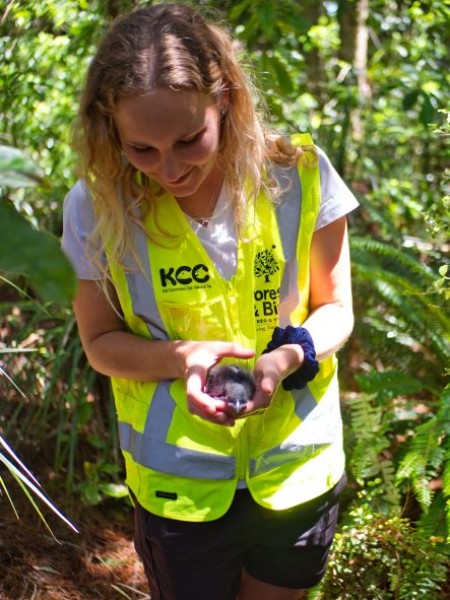 Harriet Jones, a prior Ark in the Park volunteer coordinator, with a kōkako chick in 2020. Image Forest & Bird

Each year Ark in the Park in partnership with Auckland Zoo and assisted by Ark volunteers run a kōkako census over the breeding season (August – October) overseen by Forest & Bird. The 2022 kōkako census is now complete and results will be available early 2023.

The timing of the census is informed by ARDs (automatic recording devices). A volunteer places these throughout the Ark to determine when kōkako start calling to first start the census, as well as surveying areas outside the planned survey area to see if it needs to be expanded as their population spreads throughout the Waitākere Ranges. A second volunteer analyses all the recordings.

This year one pair of kōkako were spotted building a nest in September, which is very early. In previous seasons nesting started around the second week of October, which is already relatively early compared to other kōkako populations in Aotearoa.

The census collects information about every bird that is seen including their locations, their territories, and any individual identification (including bands) that are spotted.

The census gathers this information, so the Ark team know:

If you’re visiting the Waitākere Ranges and see or hear kōkako, please let us know

This article first appeared in the October 2022 E-news.