A tale of two whānau 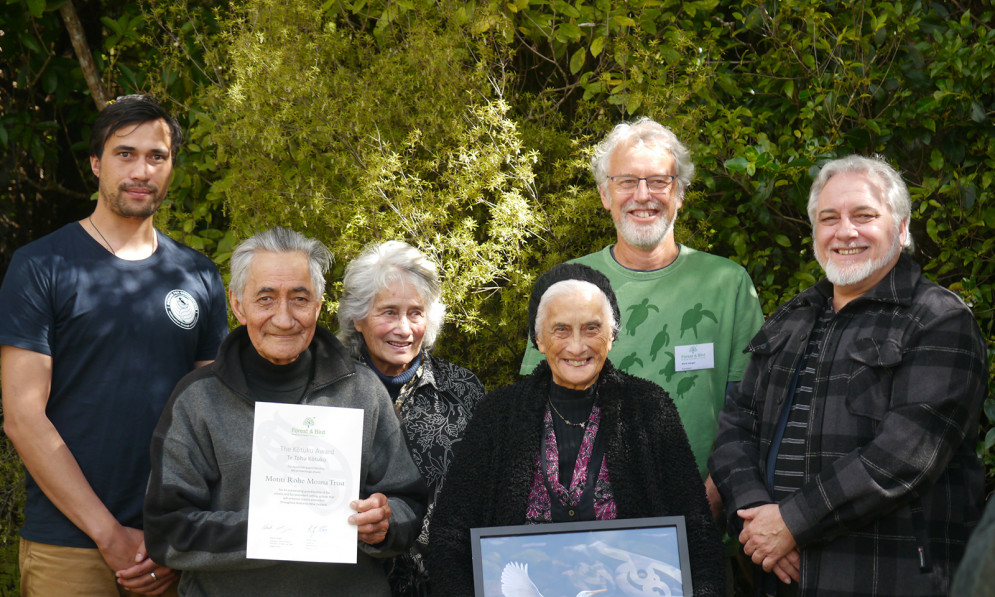 In 1958, a tiny hapū from Motiti Island asked the Prime Minister Walter Nash to prohibit fishing near their home. He declined to do so. In 2018, they asked his great-grandson Fisheries Minister Stuart Nash to finish the job and allow coastal waters in the Bay of Plenty to flourish once again. By Caroline Wood.

A version of this story appeared in the Summer 2018 issue of Forest & Bird Magazine.

A small hapū on Motiti Island has been battling for more than 60 years to protect the local marine environment, and their efforts intensified following the Rena ship wreck on the nearby Otāiti/Astrolabe Reef in October 2011. 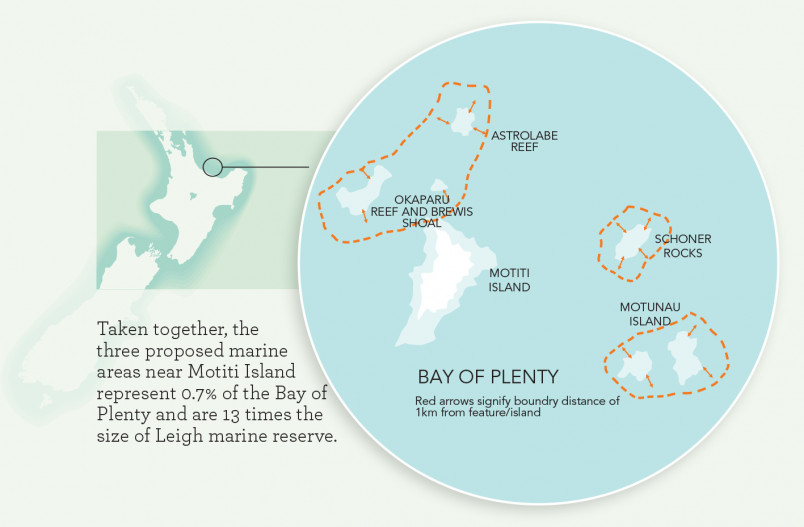 In 1958, Motiti islanders complained to fisheries officials that the waters surrounding their island were being so heavily fished by commercial and amateur fishermen that the people living on the island were finding it hard to catch sufficient fish to live on.

The local district inspector of fisheries, Mr K Fraser, District Inspector of Fisheries, agreed they had a case, writing in his June 1958 report: “The population of Maoris on the island is 200 and they depend on the harvest from the sea for 90% of their food. The people are finding it very hard to catch sufficient fish because of the activities of spear fishermen.

“A request is to be made to Mr W Nash, Minister of Māori Affairs, to bring in a regulation prohibiting fishing within 400 yards of Motiti Island by all people except those living on Motiti Island.

“I consider the request of the Motiti Island Maoris to have the fishing reserved for their people is most reasonable.”

The Minister of Māori Affairs, Mr W Nash, was of course none other than Sir Walter Nash, who at the time was also the 27th Prime Minister of New Zealand. He turned down the islanders’ request.

Kaumātua Umuhuri Matehaere, 75, chair of the Motiti Rohe Moana Trust, remembers all of this happening even though he was only a teenager at the time. “In 1958, my parent’s generation wrote to Walter Nash, Stuart Nash’s great-grandfather, who was the Minister of Fisheries.

“We wanted a reservation around Motiti Island, a form of protection for the island’s benefit. The ocean is the food cupboard for Motiti. The fish were abundant at the time, but they felt it needed some protection. They could see it was changing. People were coming to the island and diving to catch fish.

“We had no control at all. They were coming in fishing charter boats and runabout. Sometimes, 25 people were coming fishing. In the 1950s, trawlers were also coming in to shelter near the island.”

Umu grew up on the island. Once a year, he would leave the island by boat for Tauranga to buy clothes. There was no doctor. The children went to the island’s native school and weren’t allowed to speak Māori. “We got the strap if we did,” remembers Umu.

“As a boy I, would go down and collect seafood three times a week. We’d collect paua, kina, limpets, pupu, crabs and crayfish. They were abundant. At the age of 12, I’d grab them, I didn’t have a mask or anything, I’d grab the antennae. There were unbelievable numbers of them. In some areas, we didn’t even need to get our feet wet. We knew the special holes where they bred and grew. Fishing was very easy during the day or night,” he said.

“Today, we call it the ‘Bay of Empty’. The comparison there is a big difference, I’m going back 60 years. During that time, its seafood has been depleted significantly. There been a lack of control. Now our young people dive and they can’t find the fish.

“There’s no hapuku. It’s all gone. Snapper and tarakihi are now much smaller than they were. It makes me sad and angry.”

The government is appealing June’s landmark High Court Motiti ruling that agreed that regional councils can use the Resource Management Act to manage coastal fisheries to protect native biodiversity. The case will be heard in the Court of Appeal next year.

Meanwhile, the Environment Court ordered the Bay of Plenty regional council to establish three no-take marine reserves near Motiti Island (see map above), which hasn’t yet happened. Recently, the regional council approached the Trust and asked for mediation.

“So far, we’ve sought three smaller inshore reserves. But we won’t be stopping there, we will keep going. We want to see protection around the island,” adds Umuhuri Matehaere. “What we’ve achieved is not enough. We would prefer to have the 1958 original idea, closure around Motiti Island.

“It’s a landmark case, and it's going to benefit New Zealand as a whole, not just the Bay of Empty. I’m sure of that.”

“Our plea to you is to get on the case in your local area. There is a a mandatory requirement for councils to protect most classes of natural character, landscapes, features, and biodiversity, and the cultural and intrinsic value, so we need to have accountability and implement these protections.

“Next year is the 250th anniversary of Captain Cook naming Te Moana a Toi ‘The Bay of Plenty’ because of its abundance. Today, the Bay of Empty has been cleaned out, its rich biodiversity lost. I doubt Captain Cook would recognise it.

“Even worse, over the last 30 years the rate of depletion in the Moana has increased under DOC and the regional council’s watch. It’s time to turn it around.

“The Motiti Rohe Moana Trust is very grateful to Forest & Bird for being there and walking with us through this journey. It’s something we can all do in all our communities. We can achieve this.”

SEPTEMBER 2019 – The Crown subsequently reversed its position. However, inshore, rock lobster, and paua fishers carried on, saying fish stock management should be under the control of the Minister for Fisheries.

Several regional councils, including Bay of Plenty and Marlborough, have already taken action to protect their unique coastal environments following the High Court’s decision. Forest & Bird is taking legal action alongside whānau and hapū from Motiti Island, in Te Moana a Toi/Bay of Plenty, to ensure that coastal protection measures are included in regional plans.

NOVEMBER 2019 – the Court of Appeal agreed the Bay of Plenty Regional Council could impose restrictions around Motiti Island for biodiversity reasons. The decision is hugely significant because it confirms that local communities have the right to protect their coastal environments from the effects of bad fishing practice.

FEBRUARY 2021 – Conservation Minister Kiri Allan has approved marine reserves around several islands and reefs to the east and west of the main Motiti Island. 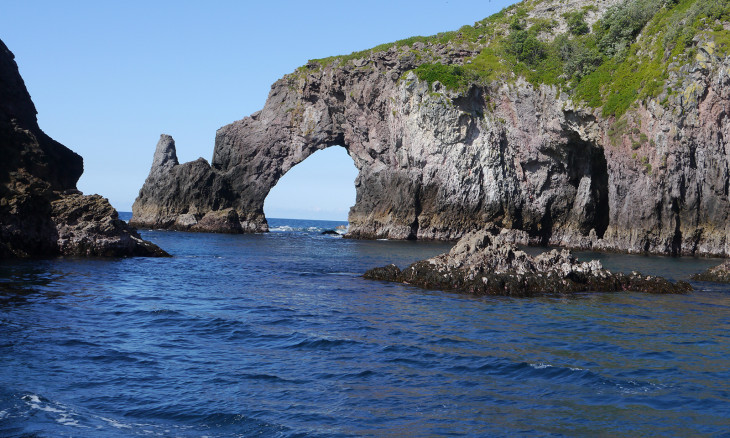 One of the islands near Motiti that will have a marine reserve around it. Credit Caroline Wood.

“We’re delighted the Environment Court and the Court of Appeal firmly upheld the relationship between conservation values and mātauranga Māori in the creation of these protected areas. We look forward to working with hapū around the country to ensure their mana moana and ecological expertise is similarly expressed,” says Mr Hague.