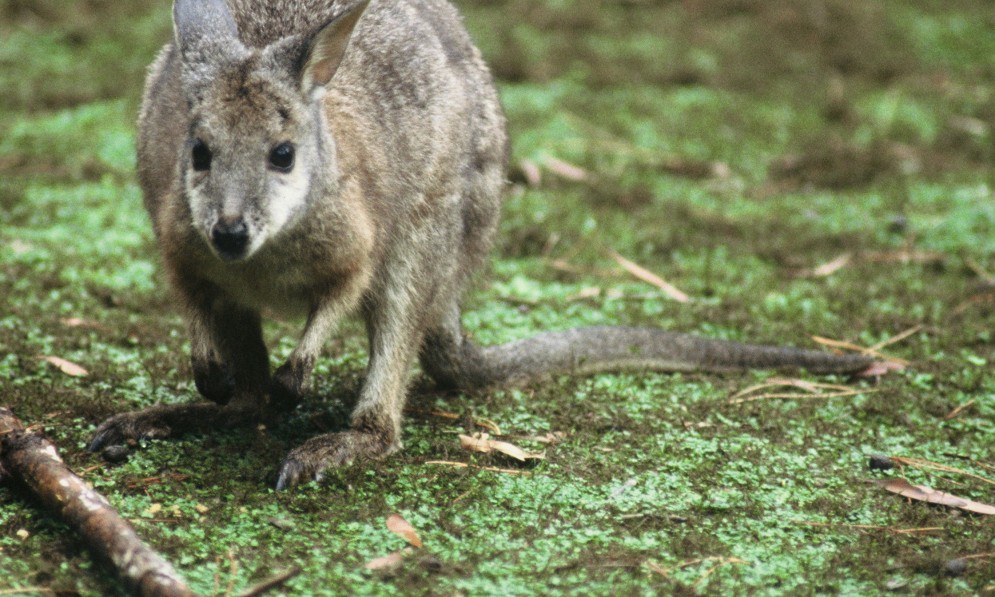 Wallaby are currently in the crosshairs in both islands as they rapidly expand their range and eat their way through the understorey of our forests. Here in the Bay of Plenty, we have been trying an alternative approach that may offer another control option for this voracious introduced pest. 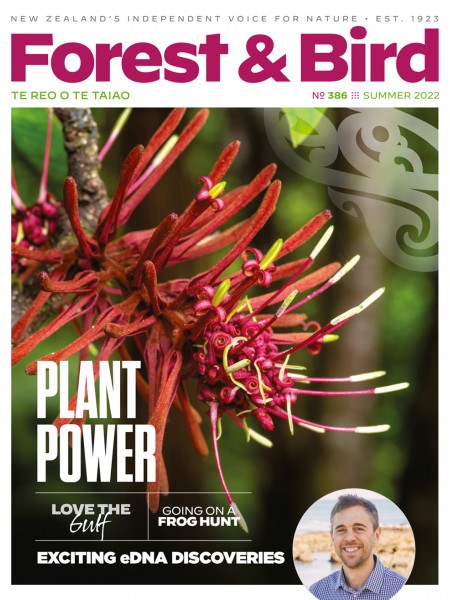 The Manawahe Ecotrust works with private landowners in the Manawahe corridor, which runs from Lake Rotoma to the ocean at Matatā in the Eastern Bay of Plenty. The goal is to protect and enhance the biodiversity in the areas of indigenous vegetation remaining in the corridor.

Along with our sister organisation the Kōkako Trust, Manawahe volunteers have worked hard over decades to get the rat and possum numbers in the key bush areas down to very low levels.

However, increasing wallaby and deer numbers are undermining the potential biodiversity gains. Wallaby have been present in the Tarawera-Rotorua area for more than 50 years but have now spread north right through the corridor to the sea at Matatā.

Unfortunately, under the Bay of Plenty Regional Council’s Pest Management Strategy, the Manawahe corridor is not a priority for intensive control. After the application of some political pressure, a small amount of funding was forthcoming, and we decided to trial two different approaches to controlling dama wallaby.

As we have very low rat and possum numbers and limited manpower, we undertook a small-scale trial comparing two methods.

In one area of the 200ha Cell Tower block, a contractor laid Feratox encapsulated strikers along existing bait station lines at 75m spacings. In the rest of the block, we tried a different approach. 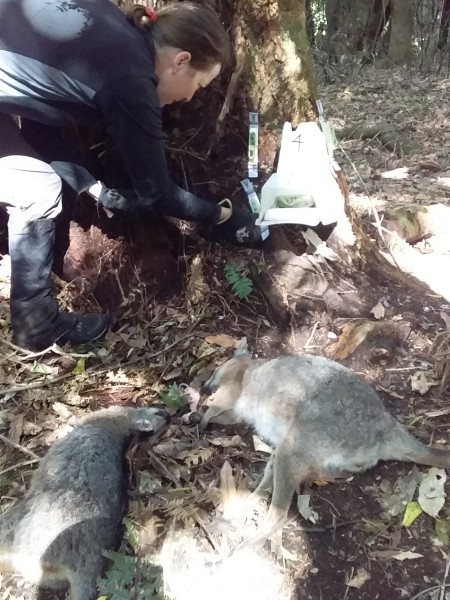 Keturah Bouchard checks the bait station in one of the trial areas. Image supplied

We wanted to see whether we could set up feeding stations to lure them into specific areas and then kill them with Feratox capsules.

We set up 10 feeding stations about 300m apart. Each station was centred around a Philproof bait station that had been opened up to make it more accessible to wallaby.

At each station, we attached karamu cuttings, the bait stations were filled with maize, and carrots were also scattered around. Each site was monitored with a game camera.

The cameras were checked every week. After three weeks, most of the stations showed wallaby activity. Some had family groups of three or four wallaby regularly visiting.

The sites were then set up with six prefeed strikers, which are a cereal and peanut butter lure without the encapsulated cyanide. They contain a sugar-laced placebo capsule to get them used to crunching the capsule for a sweet reward.

The cameras soon revealed the wallaby pulling off the prefeed strikers and eating them.

The sites were checked for wallaby carcases. Initially we were hoping for 20+ bodies, but in the end we only located eight carcases. However, we kept the cameras running and replaced the Feratox-laced strikers.

It seems the family groups may have been visiting a number of different feeding stations and giving an inflated idea of the population density. 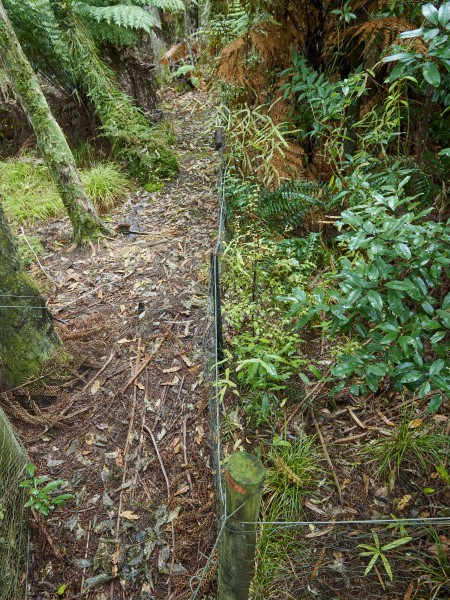 Wallaby and deer exclosure plots show the damage these browsing mammals do to the bush (left) versus the lush greenery of the pest-free area (right). Image Biosecurity NZ

Also some wallaby were seen to eat a striker and then stagger away never to be located. Some may have also succumbed to Pindone and died elsewhere. Corpses may also have been scavenged by pigs.

The alternative method of just placing strikers at 75m intervals along bait station lines (and no feeding stations) produced no kills in our block but did produce four carcases in another trial area.

We allowed a couple of months to pass then resurveyed the block using game cameras set up on automated lure pumps.

The cameras were set up in multiple locations along the bush-pasture border and also at each of our 10 feeding stations. The cameras ran for weeks at each location, but no wallaby were recorded at any site.

We are certainly not claiming to have removed all of the wallaby, but the feeding station method seems to have been an effective way for a volunteer group to reduce wallaby numbers in small bush blocks.

This effort will probably have to be repeated every couple of years to deal with the reinvasions, but we would be able to space the stations further apart.

Our group tried to export this method to another small property that had a wallaby infestation, but the results were very illuminating – the difference being rats!

We set up bait stations and prefeed strikers, and they were quickly consumed, so we then went to the cyanide encapsulated strikers. These were consumed rapidly, but no wallaby carcases were found. 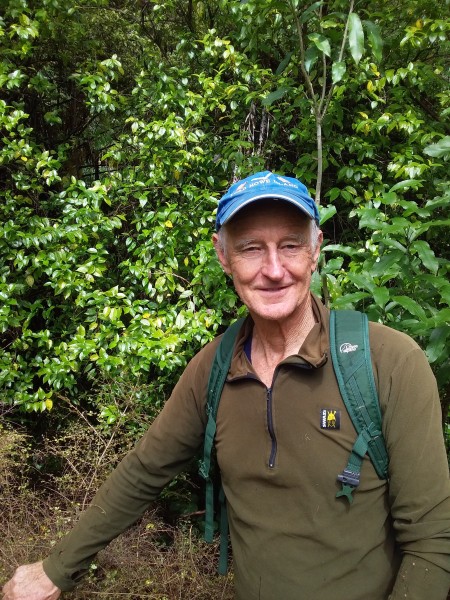 I installed cameras to see what was going on, and the problem quickly became obvious. This site had an infestation of rats that were gobbling the strikers but not the cyanide, so the wallaby had no access to the bait.

A “rat proof” wallaby feeding station was designed and mounted on a silicon-sprayed metal pipe, and we repeated the exercise, with cameras monitoring the result.

I had clearly underestimated the agility of the ship rat, with the cameras revealing three rats at a time happily sitting on the top of the stands eating around the cyanide capsules. Again no wallaby kills.

There is a lot to learn about controlling wallaby, and the feeding station method is a promising option.

But we have discovered that it is very difficult to use the feeding stations to control wallaby effectively unless the rats and possums have already been knocked back to very low levels.

Nicky Snoyink, Forest & Bird’s Canterbury and West Coast conservation advocacy manager, sits on the government’s National Wallaby Programme Governance Group. The group, which is led by Biosecurity New Zealand, is made up of representatives from mana whenua, the Department of Conservation, regional councils, LINZ, Federated Farmers, and Forest & Bird.

It has developed the Tipu Mātoro Aotearoa New Zealand National Wallaby Strategy, which sets the broader direction for wallaby-free Aotearoa. It is aligned with Te Mana o te Taiao the New Zealand Biodiversity Strategy and focuses on getting the management system right, working with communities, and empowering people.

If you're out exploring nature and run into any wallaby, go to www.reportwallabies.nz and log your sighting. Knowing where wallaby populations are starting to spread goes a long way to helping control their numbers.